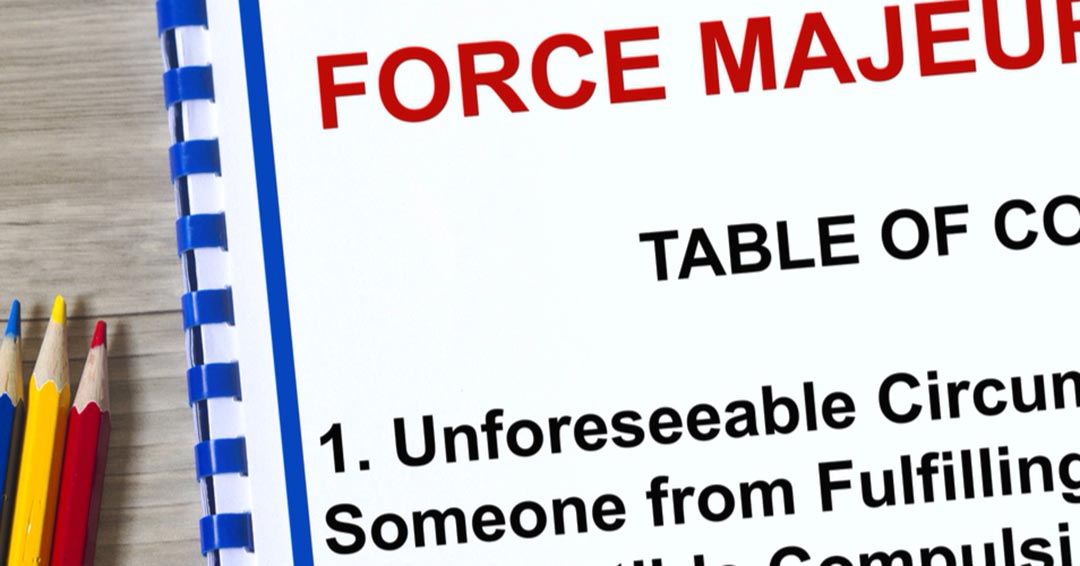 “Force majeure” (“FM”): FM, also referred to as an Act of God, addresses the scenario when performing a contract or obligation becomes impossible, difficult, or onerous to perform due to exceptional events outside of either party’s control. Typically, a party prevented from fulfilling its obligations by such events is temporarily relieved from complying with those obligations and, thus, can avoid liability that would otherwise be imposed for non-compliance. Generally, FM clauses can excuse, suspend, or extend the time to perform under the contract, upon the occurrence of an event or circumstance beyond a party’s control.

Examples of force majeure events include a list of extraordinary occurrences, such as the outbreak of war, and “acts of God”, such as earthquakes, fires, or floods, and in certain circumstances, epidemics and/or pandemics. Usually, the list is non-exclusive, where parties to the contract have to set out specific examples of events or circumstances that are beyond a party’s reasonable control.

It is important to note that not all contracts contain a force majeure clause. Sometimes the language of a contract, though not specifically referencing “force majeure”, can be given the same effect. In the absence of force majeure language, other defenses to non-performance such as the doctrine of impracticability might relieve you of some of your duties and obligations under a contract. Still, relying on an FM clause is generally the best choice to excuse non-performance. Further, if there is an FM clause, the actual language of that clause will be crucial in determining what rights you have and what responsibilities you have in claiming those rights.

FM, under the Thai context, is defined broadly in Section 8 of the Thai Civil and Commercial Code as any event that is happening or a pernicious result of which could not be prevented even though a person against whom it happened or threatened to happen were to take such appropriate care as might be expected from him in his situation and in such condition.

Is COVID-19 a force majeure event?

Most businesses and contractual agreements were widely affected by the COVID-19 pandemic. The effects of COVID-19 could justifiably cause termination of contracts by non-performance and could adversely affect the parties’ businesses. Therefore, in drafting these contracts in the future, it should be noted that contracting parties are expected to mitigate the effects of COVID-19 when performing their obligations to be beneficial for both parties. A party who claims the benefit of a force majeure clause would first have to demonstrate why the COVID-19 pandemic was causing the delay or making it impossible to perform.

The grounds for force majeure to be applicable are the following:

To invoke the force majeure clause, even if the force majeure is included in the contract, the burden of proof falls on the party who invoked the clause to prove to the Court how the pandemic directly or indirectly affected the case and how did it delay or prevent the party from performing as they agreed in the contract terms.  In circumstances where the performance could be made, but it would create more difficulty or it would cost more than it should, cannot be used as an excuse for non-performance. If they are able to satisfy the force majeure clause, they may still be liable to compensate for the delay in performance or non-performance.

Simply put, it will usually come down to two things:

As such, performance becomes impossible, illegal, or impractical.

On March 24, 2020, for example, the Thai Committee for Government Procurement and Supplies Management circulated guidelines for the administration of contracts between private entities and the government during the COVID-19 pandemic and announced that the COVID-19 is qualified as a force majeure event. Furthermore, as an example, contracts that were made between the government and private entities before the COVID-19 pandemic and were affected by it, shall have their fine deducted or exempted, in case it has already reached the agreed deadline or increase in contractual period for private entities to be able to perform in accordance with their contractual terms. In case of delivery, the government officers may appoint a representative to check and receive the delivery or they may postpone the delivery until it is available to do so. The specific period of force majeure in Thailand began with the government’s announcement of a state of emergency on March 26, 2020.

A related section to this is Section 219 of the Civil and Commercial Code given that “The debtor is relieved from his obligation to perform if the performance becomes impossible in consequence of a circumstance, for which he is not responsible, occurring after the creation of the obligation. If the debtor, after the creation of the obligation, becomes unable to perform, it is equivalent to a circumstance rendering the performance impossible.” An example would be when the government has ordered a company to cease its operations, it will be relieved from performing its obligation. However, Thai courts would likely settle where the affected party will at least get some amount of compensation from the non-performance of obligations unless it would be unfair to the party who cannot counter the force majeure clause.

In addition, the Ministry of Labor has also announced that COVID-19 is considered an event of force majeure under the Social Security Act (“SSA”) for cases that impact employers and/or employees severely enough that the employers cannot operate their businesses normally and the employees temporarily cease from work. The Social Security Office (“SSO”) declared that employees who are insured under the SSA shall receive unemployment benefits caused by the economic crisis unless they do not meet the conditions.

In cases where businesses have been disrupted due to the pandemic, they are forced to lessen their employees to lessen their expenses. The employees shall be dismissed according to the Labour Protection Act (“LPA”). Dismissal which is not in accordance with the LPA will be deemed as a wrongful dismissal which may result in a fine or imprisonment under the LPR. Hence, in this case, the pandemic or force majeure is not an excuse to not properly pay or dismiss any employees unless there is a dismissal with cause.

In conclusion, the outbreak of COVID-19 has a significant effect on commercial contracts as well as other types of contracts as well. It raised many questions on how to perform their obligations to their employees, lessors, or another party if they invoke the force majeure clause, would it be applicable? As force majeure does not release the parties from their contractual liabilities unless it is impossible. Hence, to invoke force majeure clauses, the cause and effect must be connected and shall be viewed on a case-by-case basis since each effect of COVID-19 may vary from another.

Generally speaking, it is best to avoid legal disputes since disputes could be lengthy and one or both parties may lose the benefit from the contract.